With only two weeks to go before our videogames marathon, participant Louise Stephens Alexander has come up with a novel way of getting extra sponsorship: She has promised to undertake the full 24 hours in fancy dress!

“As an incentive, if I reach my targets prior to the event, I will do the event dressed in a silly and uncomfortable manner.” she tells us on her Just Giving page, “£100 – dressed as a pirate, £200 -dressed as a hula girl, £250+ – dressed as a futuristic space robot.  If I make £500, which seems unlikely, I will do the entire thing in my wedding dress (complete with veil). Rest assured that it is extremely uncomfortable.”
Dramaturge Louise has already received enough sponsorship to guarantee 24 hours dressed like a pirate, but since Louise only got married earlier this year, SKSP thinks it would be a perfect opportunity to wear an outfit that she only got a chance to wear once, and we encourage people to help her reach that £500 target!

What’s more, Louise will be playing largely on a PS2, so won’t have a network of online buddies to keep her chin up.  She plans to play some Taito legends (superqix, space invaders), Colin Mcrae rally, Guitar Hero, Singstar, GTA, tony hawk; Portal and Lego Star Wars.  SKSP believes her friends are rallying round, including lending her an Xbox and supplying her with “pizzas and moral support on the night. DELICIOUS MORAL SUPPORT “ 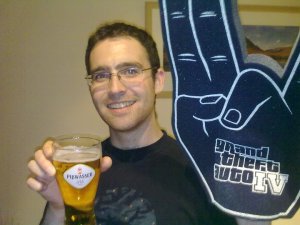 As well as those that have been enjoying their prizes like Owen here with his GTA goodies, our charity auction is going well on ebay. People from Italy and Russia have been bidding on the items donated by Rockstar North. It’s not too late to bid on most of our Rockstar goodies – keep checking our ebay listings

Let’s face it, gaming gets pretty bad press. We’re constantly accused of being anti social, having short attention spans, a taste for violence and leading kids into a life of crime. Never was that more evident than the slanderous story by the Daily Star last week that a Grand Theft Auto game based on the killings in Rothebury was in development.

Thankfully the Daily Star has ‘unreservedly’ apologised to Rockstar, admitting that there had been no attempts to ‘check the accuracy’ of the story. (i.e they made it up.). GTA has been the centre of controversy before, with people calling for the game to be banned despite the quite clear bbcf rating on the box. Rockstar have always maintained that they ‘make games for adults’.

It seems incredible that in the same week as the Daily Star allegations, Rockstar North were quietly showing their true colours by giving substantial support to a local children’s charity, and lending its backing to Sick Kids Save Point…
– Together we can show that gamers care about society, about the welfare of kids, that we are a community with a community spirit, and that we have an impressive attention span!

Thanks to generous sponosrship from
Rockstar North and The Ministry Of Gaming
we can announce several exciting prizes that could be won by participants of Sick Kids Save Point. Anyone who raises over £100 for the charity through sponsorship and gift aid will automatically enter the draw*. Now as well as helping provide valuable support and medical assistance to kids all over Scotland, you’ll be playing for prizes!

*Some prizes are for over 18s only. If the winner is under 18 an alternative will be offered.

As our game-a-thon approaches, the brave Sick Kids Save Point participants are starting to draw up plans as to what they will play during their marathon. Xbox 360 player Jamie plans to play all of the Halo games. Will he get through them all? Also on the 360 Isla plans to max out her gamerscore on Left 4 Dead. Meanwhile on the PS3 Wayne will put his Burnout Paradise addiction to the test, and Neil is threatening to spend all 24 hours of his marathon in Liberty City!

Support them now by clicking on their names and sponsoring them today!! Or if your taking part, head on over to our forums and let us know what YOU’ll be playing…

Want to take part, but don’t have any games to play? No problem, SKSP recommends free arcade brawler/mmo Dungeon Fighter. Did we mention it’s free? Great fun, and addictive enough to keep you going through your marathon…

There are still plenty people who are planning on taking part but haven’t signed up yet – please, please get your virgin page set up today, if you leave it too long you’ll have no time to collect sponsorship!